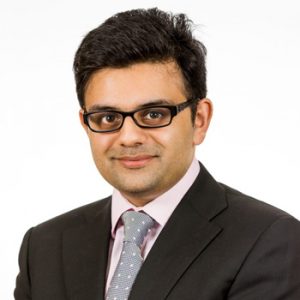 Mr Raju Ahluwalia is a fellowship trained orthopaedic surgeon specialising in foot and ankle surgery at King’s College Hospital, London. Raju graduated from Guys, King’s & St Thomas’s in London with a BSc in Immunology – writing a thesis on the expression of infection & inflammatory markers and winning a bursary and further scholarship to continue his research from Guys and St Thomas’s Hospital.

His early surgical training was on the King’s College rotation before being appointed to the Cambridge training program. Raju completed his training on the Chelsea and Westminster Rotation with additional training at the Royal National Orthopaedic Hospital Stanmore where he worked with some of the UK’s doyens of foot and ankle surgery including past British Orthopaedic Foot Ankle Society (BOFAS) presidents.

Raju is one of the consultants at the internationally recognised Kings Diabetic Foot Unit and invited member of the Diabetic Foot Study Group and part of the International Diabetic Foot Care Group – a European group of surgeons and physicians working as an advisory group through translating research and publishing on improving diabetic foot medicine through clinician and patient education.

He has been faculty and lecturer of a number of FRCS and Trauma Courses and part of the organisational team of the annual King’s Charcot Reconstruction Meeting, at the Oval, London and actively involved in training the next generation of doctor’s at Guy’s, King’s and St Thomas’s Hospital Medical School and supervising trainees from the London Deanary.

He has actively undertaken charity work orgainising sports days and played sport at university.   He is happily married living with his family in London.